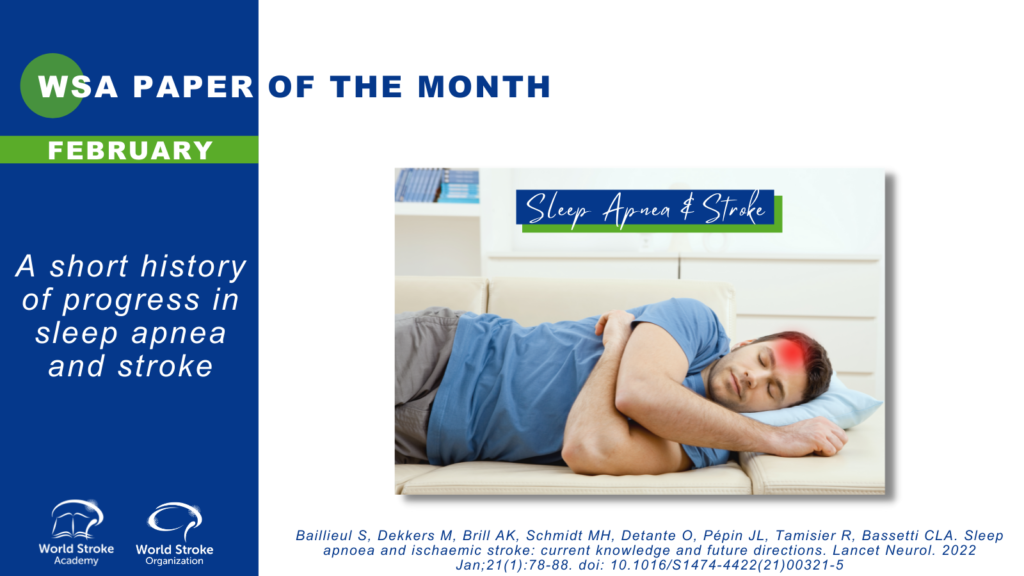 Title: A Short History of Progress in Sleep Apnea and Stroke

“Sleep is that golden chain that ties health and our bodies together”
– Thomas Dekker (English dramatist, 1572-1632)

Sleep disorders are a prevalent medical condition in the general population. According to the American Sleep Association, 50 to 70 million of adults in the USA have a sleep disorder, half of them had obstructive sleep apnea (OSA) and 48.0% report snoring.1 The consequences of poor sleep quality include fatigue, irritability, anxiety, daytime dysfunction, slowed responses, and perpetuating mechanisms that leads to other disruptive behavior (e.g.  increased caffeine, alcohol, smoking and food intake).2

Sleep disorders include insomnia, sleep apnea, rapid eye movement (REM) sleep behavior disorder, and circadian rhythm disorders. Sleep apnea is one of the most sleep disorders conditions. Obstructive sleep apnea, the most prevalent sleep apnea is manifested by a partial or complete interruption of airflow during sleep. It affects nearly 50% of patients with an ischemic stroke.3 In the present article,4 the authors provided a detailed review of the existing gaps in the diagnosis, management, and follow-up strategies of sleep apnea in stroke patients.

What have we learned about sleep apnea in patients with an ischemic stroke in the last two decades?

In summary, the present review article summarizes the advances on this topic. As highlighted by the authors several uncertainties remained. We need more sensitive metrics for the diagnosis of OSA and central sleep apnea, designing new diagnostic and therapeutic algorithms based on artificial intelligence models, and developing more cooperative approach integrating the expertise from respirologists, sleep medicine experts, stroke neurologists, academic organizations, patients with live experiences and policymakers.

Back to course details
Next Lesson →