The Paper of the Month November 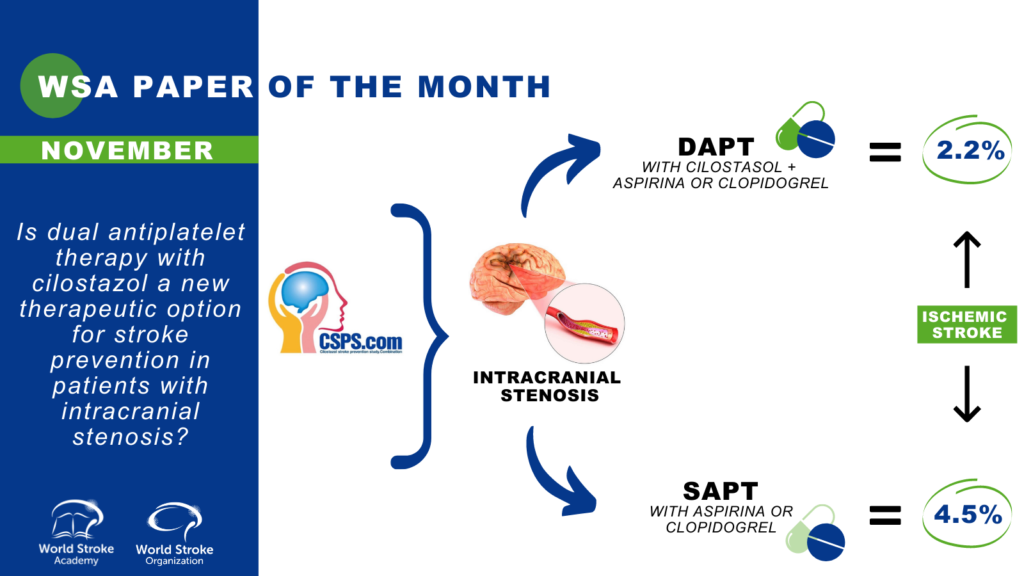 Title: Is dual antiplatelet therapy with cilostazol a new therapeutic option for stroke prevention in patients with intracranial stenosis?

The authors performed a subgroup analysis of the Cilostazol Stroke Prevention Study for Antiplatelet Combination (CSPS.com) trial, a randomized controlled trial in high‐risk Japanese patients with ischemic stroke aiming to compare the efficacy and safety of dual antiplatelet therapy (DAPT) with cilostazol and clopidogrel or aspirin to those of single antiplatelet therapy (SAPT) with clopidogrel or aspirin in patients with intracranial symptomatic or asymptomatic arterial stenosis  (ICAS) of at least 50%¹.

DAPT using cilostazol was superior to SAPT (either clopidogrel or aspirin) for the prevention of recurrent stroke and vascular events without increasing bleeding risk among patients with intracranial arterial stenosis after stroke.

The CSPS.com trial Investigators reported that, among 1879 Japanese patients with high-risk noncardioembolic ischemic stroke in the previous 8 to 180 days, adding cilostazol to single antiplatelet therapy with aspirin or clopidogrel reduced the annual incidence of recurrent ischemic stroke by half compared with monotherapy (2.2% dual therapy with cilostazol versus 4.5% monotherapy, hazard ratio, 0.49 [95% CI, 0.31–0.76]), without increasing the annual risk of severe or life-threatening bleeding (0.6% dual versus 0.9% monotherapy, hazard ratio, 0.66 [0.27–1.60])².

Neurologists are always looking for new possibilities to improve stroke prevention, so can these results affect our usual clinical treatment strategy?

Hankey GJ³ analysed the results of the CSPS.com trial regarding bias (detection bias, performance bias, attrition bias), precision, plausibility, consistency and generalizability. Most important points were regarding precision and generalizability. The precision analysis showed wide range of recruitment (13-62 days, median 26 days), with short follow-up period (median 1.4 years), quite small total number of primary outcome events (recurrent ischemic stroke) in each group (29 [3%] for DAPT and 64 [7%] for SAPT), wide 95% CI of the hazard ratio of recurrent ischemic stroke with DAPT vs SAPT (0.31–0.76).Also, the estimate of the hazard ratio of severe or life-threatening bleeding was imprecise, ranging from a 73% reduction to a 60% increase with DAPT vs SAPT. Regaring generalizability, all of the RCTs of cilostazol in patients with ischemic stroke have been conducted in Asian countries and it remains uncertain whether the results of these trials are generalizable to other populations in other continents.

The recent review on the American Heart Association/American Stroke Association Guidelines 2021² concluded that DAPT (aspirin plus clopidogrel) was more effective than SAPT for prevention of secondary ischemic stroke when initiated early after the onset of minor stroke/high-risk transient ischemic attack and treatment duration was <90 days. When the treatment duration was longer and initiated later after stroke or transient ischemic attack onset, DAPT was not more effective than SAPT for ischemic stroke prevention and it increased the risk of bleeding². However, trials regarding intracranial stenosis/use of cilostazol were not included in this meta-analysis due to insufficient/heterogenous data⁴.

Another recent review and meta-analysis aimed to determine the efficacy and safety of cilostazol for secondary stroke prevention³. It included 18 randomised trials with 11 429 participants. There were 3 studies comprising 755 patients that included only patients with symptomatic ICAS. For most outcomes, there was no significant difference between the symptomatic ICAS and mixed/other stroke subgroup. In the ICAS subgroup, cilostazol administration was associated with an insignificant increase in risk of MACE (RR=1.38, 95% CI 0.67 to 2.85, p=0.38), compared with a statistically significant decrease in MACE risk in studies which did not exclusively recruit patients with symptomatic ICAS. There was no significant decrease in risk of ICAS progression or worsening (RR=0.63, 95% CI 0.25 to 1.58, p=0.33) after cilostazol administration⁵.

Cilostazol use in patients who have contraindications (resistance or higher risk for haemorrhagic complications) to Aspirin or Clopidogrel?

Cilostazol selectively inhibits phosphodiesterase 4 and adenosine reuptake, increases activation of intracellular cyclic-AMP, inhibits platelet aggregation and dilates the blood vessels. The analysis by Hankey GJ³ of the CSPS trial suggests that cilostazol took several months to take effect and alter stroke risk and hypothesized that that the vasodilatory (and other pleiotropic) properties of cilostazol may be as, or more important, than any antiplatelet properties.

A nation-wide cohort study by Lee TH et al.⁶ compared the long-term efficacy and safety between cilostazol and clopidogrel in chronic ischemic stroke and showed a trend of lower frequency of recurrent acute ischemic stroke or major bleeding in patients with a history of hypertension or gastrointestinal bleeding in the cilostazol group.

Conclusion: Although DAPT with cilostazol has shown efficacy and safety in secondary stroke prevention in patients with intracranial stenosis, further randomized clinical trials conducted outside Asia are needed to increase  the generalizability to populations with a different ethnic background (or non-Asiatic populations).

This was a subgroup analysis of the CSPS.com trial, which was a randomized controlled trial to compare dual antiplatelet therapy (DAPT) with cilostazol and aspirin or clopidogrel to single antiplatelet therapy (SAPT) with aspirin or clopidogrel in high-risk Japanese patients with non-cardioembolic ischemic stroke in order to investigate superiority of DAPT to SAPT for the long-term prevention of recurrent stroke among patients with intracranial arterial stenosis (ICAS).

Dual antiplatelet therapy with cilostazol was superior to aspirin or clopidogrel alone for the long-term prevention of recurrent stroke and vascular events without increasing bleeding risk in patients with ischemic stroke and ICAS.

This was the first evidence to support that DAPT with cilostazol can be a therapeutic option for the long-term prevention of recurrent stroke and vascular events without increased bleeding in patients with symptomatic or asymptomatic ICAS of at least 50% after ischemic stroke.

It was unclear that DAPT with cilostazol is superior to aspirin or clopidogrel alone since the risk of recurrent stroke is still high despite adherence to the current guidelines including DAPT with aspirin and clopidogrel plus intensive risk factor management in patients with symptomatic ICAS. In this CSPS.com subgroup analysis, the risk of stroke, ischemic stroke, and vascular events were less than half in DAPT with cilostazol than aspirin or clopidogrel alone, whereas the bleeding risk did not differ.

This study has some limitations. First, the sample size was relatively small and the evidence level was limited because of a subgroup analysis. Second, it remains uncertain whether the present results can be generalized to other ethnicities than Japanese. Third, one cannot tell from these data whether DAPT is preventing recurrent stroke related to ICAS or just preventing stroke in any territory related to other mechanisms of stroke in patients with asymptomatic ICAS. Therefore, a large randomized controlled trial of DAPT with cilostazol versus aspirin or clopidogrel alone for the long-term prevention of recurrent stroke is required in multiethnic patients with symptomatic ICAS.

The CSPS.com trial did not include patients within 7 days after stroke. Another subgroup analysis of the CSPS.com trial suggests that long-term dual antiplatelet therapy using cilostazol was more effective for secondary stroke prevention than monotherapy in patients initiating the medication at 15 days or later. Therefore, DAPT with aspirin and clopidogrel within a few weeks after stroke, followed by DAPT with cilostazol and aspirin or clopidogrel thereafter, could be a strategy for the short-term to long-term prevention of recurrent stroke without increasing bleeding risk in ICAS patients.

Join us to explore the #history of EVT in collaboration with @SVINJournal, to celebrate the inaugural issue

This website uses cookies to improve your experience while you navigate through the website. Out of these, the cookies that are categorized as necessary are stored on your browser as they are essential for the working of basic functionalities of the website. We also use third-party cookies that help us analyze and understand how you use this website. These cookies will be stored in your browser only with your consent. You also have the option to opt-out of these cookies. But opting out of some of these cookies may affect your browsing experience.
Necessary Always Enabled

Performance cookies are used to understand and analyze the key performance indexes of the website which helps in delivering a better user experience for the visitors.

Analytical cookies are used to understand how visitors interact with the website. These cookies help provide information on metrics the number of visitors, bounce rate, traffic source, etc.

Advertisement cookies are used to provide visitors with relevant ads and marketing campaigns. These cookies track visitors across websites and collect information to provide customized ads.

Other uncategorized cookies are those that are being analyzed and have not been classified into a category as yet.