The Paper of the Month May

Title: How can knowledge on genetics improve treatment options in patients with stroke? 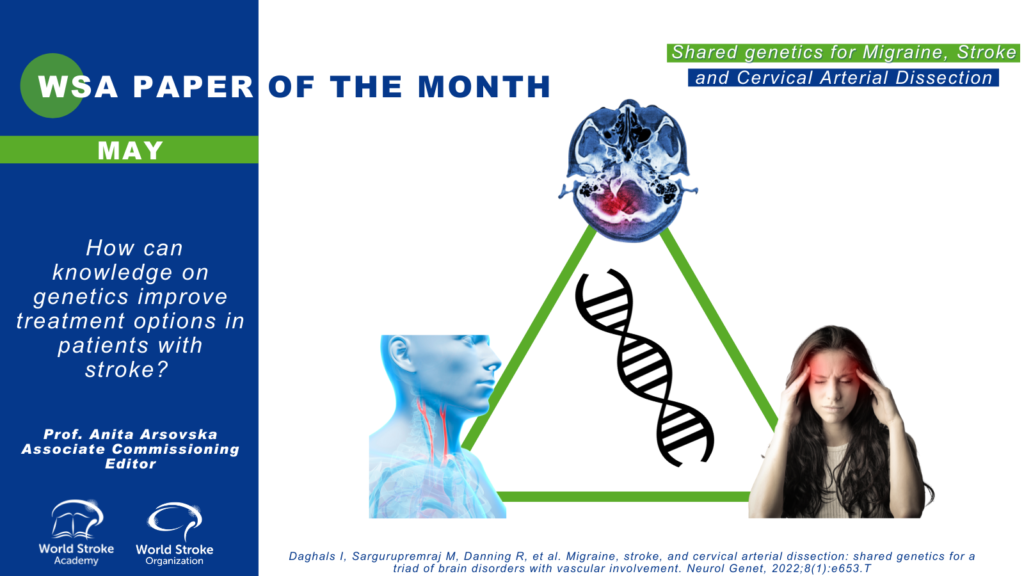 Title: How can knowledge on genetics improve treatment options in patients with stroke?

The authors performed genetic analyses summary statistics from genome-wide association studies of the largest available samples of stroke and migraine (1). They observed genome-wide genetic correlation only between cervical artery dissection (CeAD) and migraine, especially migraine without aura (MO). Local genetic correlations were more extensive between migraine and CeAD than those between migraine and stroke or CeAD and stroke. Mendelian randomization supported potential causal influences of migraine on CeAD  per doubling migraine prevalence = 1.69 [1.24–2.3], p = 0.0009) with concordant risk, but with opposite risk on large artery stroke (0.86 [0.76–0.96], p = 0.0067). The authors conclude that theseresults provide novel support for the contribution of vascular functions to migraine and enhance our understanding of the association of comorbidities among migraine, CeAD, and stroke.

Migraine is a common primary headache disorder, affecting up to 20% of the general population, mostly females and has a strong genetic component (2).Numerous studies, including five meta-analyses, have linked migraine, particularly migraine with aura (MA), with an increased risk of ischaemic stroke (IS). The association between migraine and ISis stronger for women, especially those older than 35 years, who use oral contraceptives and smoke (3). The association between migraine and stroke is complicated because almost any cerebrovascular event can trigger a migraine-like attack, which may lead to misinterpretation of the stroke event as ‘complicated migraine’ (4). A recent systematic review and meta-analysis found that migraine-like symptoms in acute ischemic stroke (AIS) patients were less common: photophobia occurred in 13%, phonophobia in 8%, nausea in 17%, and vomiting in 16% of patients with headache (5). Precise mechanisms by which migraine is linked to stroke are unknown and possibly multifactorial, such as cortical spreading depression, and alterations in endothelial and arterial function, which predispose to atherosclerosis and subsequent cardio and cerebrovascular diseases (6). CeAD is the most common identified cause of stroke in the young adult populationand it is associated with migraine and IS.The Italian study revealed that the CeAD IS group had higher rates of migraine than the non-CEAD IS group (30.8% vs 24.4%, P =.01) (7). This difference was mainly accounted for by migraine without aura (24.0% vs 15.6%, P <.001), which was found to be independently associated with CeAD IS (odds ratio [OR]: 1.74; 95% CI, 1.30-2.33).This association was stronger among male patients (OR: 1.99; 95% CI, 1.31-3.04) and those younger than 39 years (OR: 1.82; 95% CI, 1.22-2.71). In addition, CeAD IS patients with and without migraines had similar risk factor profiles such as hypertension and diabetes (19.4% vs 24.7%, P =.29; and 1.0% vs 1.3%, P >.99, respectively).

The CHARGE (Cohort for Heart and Aging Research in the Genomic Epidemiology) consortium conducted a genome-wide association study analysis of incident ischemic stroke within population based cohorts of stroke free individuals (10).This analysis included 19,602 Caucasians with 1,544 incident ischemic strokes that developed in a period of 11 years. An association between a chromosome 12p13 locus genetic variant and ischemic stroke risk has been demonstrated, and when directly genotyped, rs12425791(single nucleotide polymorphism-(SNP) on chromosome 12p13) was associated with an increased risk of total and ischemic stroke.

Epigenetics and single nucleotide polymorphisms variations may be used for therapeutic considerations in stroke. Examples are thrombolytic therapy with tissue plasminogen activator (tPA), anticoagulation therapy with dabigatran and genetic testing for clopidogrel treatment (12).

A study examined 140 candidate single nucleotide polymorphisms (SNPs) in 497 tPA-treated ischemic stroke patients and showed that IL1B and vWF variants were associated with early recanalization.The same authorshave published a genetic variation rs669 (Val1000Ile) in the alpha-2-macroglobulin generelated to an increased risk of hemorrhagic transformation after tPA treatment. So, genetic information may possibly be used in the future to predict the response of tPA treatment in ischemic stroke.

In the Randomized Evaluation of Long-term Anticoagulation Therapy (RE-LY) study a Genome Wide Association Study was performed in 2944 RELY patients and showed that the CES1 rs2244613 minor allele was associated with lower active dabigatran metabolite levels. This minor allele was associated with a lower risk of any bleeding in the dabigatran treated patients but there was no reported association with ischemic events.

Clopidogrel is metabolized to its active metabolite by CYP2C19 but the clinical utility for genetic testing to detect influence on CYP3C19 activity is still under debate. The CYP2C19 gene is particularly important for the activation of clopidogrel, and certain common variations (polymorphisms) in this gene have been associated with clopidogrel resistance (i.w. whether patients are poor or intermediate metabolizers). CYP2C19 gene polymorphisms account for most of the variation in clopidogrel activation due to genetic factors (13). Detection of CYP2C19 is usually available among stroke centers and have practical clinical implications (e.g. switch Clopidogrel to Ticagrelor if a mutation is detected).

There are increasingly effective and personalized risk stratification tools that assist with clinical decision-making, such as development of the Stroke Riskometer and other similar smart phone applications. Personalized medicine is a growing field in which a range of diagnostic tests, such as genetic screening, may be used by clinicians to determine which medical treatments will work best for a patient (14, 15). It includes patient’s preferences, the clinical context, or use medical interventions to alter molecular mechanisms that can impact in outcomes, risks of side effects, or medical complications.