The Paper of the Month December

“There are no secrets to success. It is the result of preparation, hard work, and learning from failure.”   Colin Powell (American politician, statesman, diplomat)

In a recent open-label, multicenter, randomized trial in Europe, MR CLEAN-NO IV randomly assigned 539 stroke patients in a 1:1 ratio to receive EVT alone or intravenous alteplase followed by EVT (the standard of care).1 The primary outcome was the modified Rankin scale at 90 days. The trial was designed to test noninferiority of thrombectomy alone by a margin of 0.8 and also to test superiority (see brief explanation and figure below). The adjusted common odds ratio was 0.84 (95% confidence interval [CI], 0.62 to 1.15; P=0.28) showed neither superiority nor noninferiority of EVT alone. There were no significant differences in mortality, symptomatic intracerebral hemorrhage, Barthel index, successful recanalization or reperfusion rates, or final infarct volume between groups. The authors concluded that “EVT alone was neither superior nor noninferior to intravenous alteplase followed by EVT with regard to disability outcome at 90 days after stroke”.1

Commentary: EVT became standard of care in the management of acute ischemic stroke for eligible patients with large vessel occlusions.2-6 Several meta-analyses compared the benefits of intravenous thrombolysis (IVT) prior to EVT vs. tPA alone or EVT alone with conflicting results.7-10 In fact, this is the fourth trial to test the non-inferiority of EVT vs. IVT + EVT.1, 11-13  In other words, these trials compared whether thrombolysis can be avoided prior to thrombectomy (See a comparative table of baseline characteristics and hypothesis testing below).

* only patients with a mRS 0-1 were included in this trial.

What have we learned from the results of these 4 trials?

1) Heterogeneity: Despite the similarities in baseline characteristics, there was a variation in the non-inferiority margin among trials and the proportion of randomized patients with pre-existing disability (mRS 1 to 3) (See table).

Figure 1 illustrates different results and points estimates (95%CI) comparing the benefits of a new treatment vs. a standard one. The legend provides a simple explanation to help clinicians understand the meaning of each scenario (A to G). An important consideration is the determination of the non-inferiority margin. Readers can also refer to recent publications that illustrate these differences, including a document from the FDA. 14 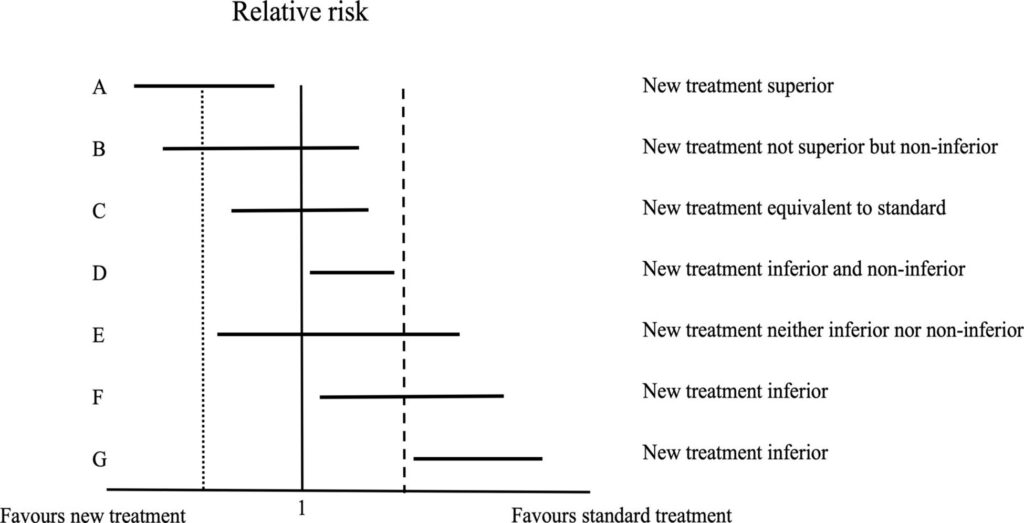 In summary, what this information tell us is that for patients with LVO that would fulfill the entry criteria in these trials, EVT alone would achieve similar clinical outcomes if the procedure can be done within 60-90 min.

4) An important reminder: Large vessel occlusions (LVO) only represents 1 out of 3 or 4 patients with an acute ischemic stroke presenting to an ED.16-18 In other words, the great majority of acute stroke patients do not have LVO, and therefore are not candidates for EVT. For those patients, intravenous thrombolysis remains standard of care.

5) Are there any specific characteristics that would favor direct EVT vs. mothership bridging with iv thrombolysis?. As eloquently described by our colleagues Dr. Raul Nogueira and Dr. Giorgios Tsivgoulis19, patients with long clots (>8mm), more proximal occlusions, large infarct core, and factors associated with higher risk of intracerebral hemorrhage with iv thrombolysis would favor direct EVT, among others (See figure 2 below- reproduced with permission).

In conclusion, the initial clinical assessment and brain imaging will help classify stroke patients and estimating the best treatment. Intravenous thrombolysis remains as the first line option among patients with an acute ischemic stroke without contraindications and absence of a LVO. Some colleagues advocate for another clinical trial given the results of CLEAN-NO IV. In my personal view, EVT alone can be considered for those with a LVO who are nearby a tertiary stroke center that can deliver EVT in timely manner (ideally less than 60 min from door to groin puncture), and specially when there are higher risk of complications with iv thrombolysis. Bridging therapy (iv thrombolysis prior to EVT) would remain as the optimal option to improve the likelihood of achieving independency when expecting delays in undergoing EVT, drip and ship from a primary stroke center with prologued time between inter-facility transfers, or when there is uncertainty regarding the timing of EVT.

The clinical effect of direct endovascular treatment (EVT) in stroke patients as compared to patients treated with the combination of thrombolysis (IVT) with alteplase and EVT.

In patients presenting directly to centres capable of providing both treatments EVT alone was neither superior nor non-inferior to IVT followed by EVT with regard to disability outcome at 90 days after stroke. The incidence of symptomatic intracerebral haemorrhage was similar in the two groups.

We now know that the combination therapy should remain the standard. However, knowing that the results look quite similar, in specific cases the treating physician can decide to treat with direct EVT.

That the incidence of symptomatic intracerebral haemorrhage was similar in the two groups. This suggests that the haemorrhagic effect of IVT is at least partly attributable to the opening of the blood vessel, not so much an effect of the thrombolytic drug itself.

The IRIS project has just started – in IRIS we are going to pool the individual patient data of all the trials similar to the Mr Clean NoIV. In IRIS we can analyse different subgroups of patients where one might expect that the effect of direct EVT is different as compared to the combination treatment. For instance, patient with a large proximal clot might not so much benefit from pre-treatment with IVT as compared to patients with a smaller more distal clot. We don’t know right now -hopefully IRIS will give us some answers.

Many thanks to all PhD’s, all trial nurses, all investigators and above all – all patients who participated in this trial.